How Will SCOTUS Rule in Moore v Harper 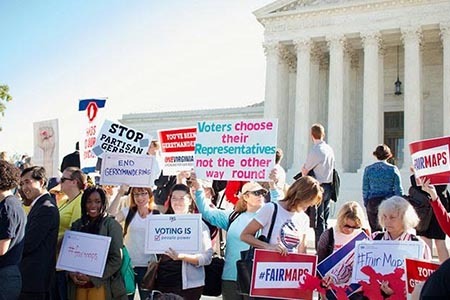 Are states at risk of losing authority in matters relating to federal elections?

In Moore v. Harper, the U.S. Supreme Court could adopt a fringe political theory called the Independent State Legislature Theory (ISLT), which would give state legislatures nearly unrestricted authority to set the rules for federal elections.

On December 7, 2022, the League of Women Voters of the United States issued a press release referencing the amicus brief it filed with the Supreme Court of the United States (SCOTUS) related to the Moore v Harper case. Theirs was added to many others (nearly 70) sent to the Supreme Court urging SCOTUS to not uphold the “independent state legislature theory” (ISLT). The League will continue to monitor SCOTUS’s decision, expected to occur around June 2023. Read the League’s statement from December 7, 2022 to learn more.

Vote in the Consolidated Election on April 4, 2023